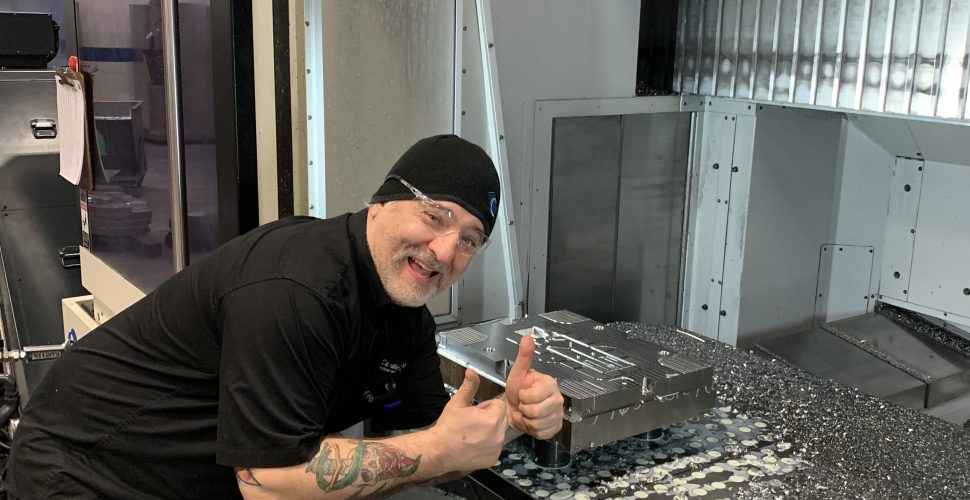 WINDSOR, ON:  When the call came, Cavalier Tool and Manufacturing Ltd. was ready.

After Cavalier was designated “an essential service,” by Ontario Premier Doug Ford during the early stages of Canadian preventative pandemic measures of COVID-19, the request was issued by the provincial government: could the Windsor-based moldmaker jump into the fray and design and manufacture tooling to support increased production requirements for wall-mounted, pump-action hand sanitizer dispensers for hospital use?

A month later, they were asked if they could turnaround tooling for a plate component for a standalone dispenser.

The answer, in both cases, was a resounding “yes” from Cavalier president Brian Bendig.

“It’s the right thing to do. It feels good doing it. We all want to be part of something that saves lives,” Bendig recently told Automotive News Canada during an interview.

However, the challenge that faced Cavalier was complex: it would involve not only a quicker-than-usual turnaround and the unwavering support and mobilization of the team Bendig likes to call “The Cavalier Army,” but the co-ordination and co-operation of several suppliers.

“We reached out at senior levels of management to our supply chain – the manifold people, the steel suppliers – and said, ‘Hey, this is what we’ve got coming. Are you willing to be a partner and commit your people to the partnership?’ “Without exception, they all said, ‘yes.’”

There was one other obstacle, albeit a minor one: Cavalier is renowned for making sizeable molds for automotive and non-automotive clients. Hand sanitizer dispensers are smaller products than what the company is used to manufacturing – and the same applies to the additional plate component request.

But both Bendig and Galbraith say Cavalier took the challenges in stride.

One of the challenges is spotting a tool the size of a shoebox in a spotting press in which you could park a golf cart. Cavalier is used to creating larger tools for large mold so the dispenser – with 20 plus parts – was a challenge.

So yes, size does matter!

Cavalier quickly came up with a solution to achieve the end goal for the customer.

“It was a challenge but that is how we have grown our business. We need to find a way to provide dependable and quick results,” says Bendig.

Another challenge: a lack of small parts.

As with many shops, a design library is customized to provide standard build components. This project was not standard.

“We have no small parts in our library so we had to create them,” says Galbraith. “And our team also took this in stride and helped overcome this part of the challenge.”

“We are a big tool shop,” Galbraith notes. “But we needed people to know that we’re willing to pivot. We’re willing to accommodate what’s needed to fight the ongoing pandemic that the coronavirus has brought upon us.”

Bendig says Cavalier was “very well suited” for the project and could provide a quick and high value end product. “We developed a solution in our usual step by step process. We are able to overcome obstacles and achieve results.”

“We’ve got a lot of the best equipment and a lot of processes in house that allow us to be very quick to achieve deadlines,” he explained. “The last number of years we’ve been focusing our line on speed-to-market – to get to that finish line faster than the guy next door.

“With our levels of automation, it was a good fit. The molds themselves aren’t overly complex, though they’re smaller than what we traditionally do. But this wasn’t really judged on the complexity: it was all about the speed.”

And speed was the one thing that Cavalier delivered. The company received the first request for help on a Thursday: by Monday afternoon they had completed a design review and were cutting steel for the molds.

More impressively, Cavalier got the task done with a reduced staff in the plant and strategic social distancing. Even 30% of Cavalier’s design team from India were unavailable to do the lockdown.

“What do you do? Things change. How you get blocks in front of machines is different. There’s more of a team effort that goes into how we set things up because it’s got to be quicker/faster. Before, if you had a typically large mold, you might have had two or three people on that mold. Now there’s only one.”

Brenda Quint, Cavalier’s General Manager, said employees didn’t hesitate to pitch in where needed – with mold designers even working lengthy shifts over the weekend to ensure project needs were met.

“The team was ready to do what they needed to do,” Quint says. “They were there for the meetings; they were on time and they worked as hard as they could and as fast as they could to get this done.”

The staff at Cavalier – ranging from tool makers, mold makers, mold designers, CNC Machinists/ CNC Lathe Operators, Project Managers, our Plastic Injection Mold Sales team, administrative staff – appropriately now referred to as the #CavalierArmy. Many staff stepped up – they worked extra shifts and they took pride in being part of a project that is part of the campaign to support many other front line workers needing hand sanitizer.

“Our staff are definitely appreciated and valued,” says Bendig, who does regular visits to the shop floor to check on tasks and check in with staff.

No wonder Cavalier was “recommended to their end user by three or four of our competitors”. Their reputation for getting the job done precedes them.

Nick Krewen is a veteran journalist and business writer whose current and past clientele has included General Motors, the Toronto Star and the Globe and Mail. http://nkbusinesseditorial.com